The Karbala ritual of radat (الردات الكربلائي سياسي, lit the Karbala political responses) during Muharram is under-discussed. Despite how many people try to use religion as a scrying sheet for political predictions in Iraq, very little discussion has been had on radat, a ritual that has "political" in the name! I recently tweeted about my favorite radat of late, and thought that I should elaborate on what it symbolizes.

Radat is performed by mowkebs (موكب), which are affiliations that perform ceremonies and services for pilgrims during Muharram. Each mowkeb is different, typically with a name such as Abbasiyya, Bab Baghdad, Bab Najaf, etc. Before Ashura, there are around 300 mowkebs in Karbala, with 75-1151 of them performing majlis and radat. A radat is a chant performed around the Shrines of Abbas and Hussein:

A radat at its core consists of a sign and a group of people. A mowkeb is split into a few groups (2+ usually), and they march from the shrine of Abbas into the shrine of Hussein. Each group carries a different poem, and they repeatedly while walking between the shrines. Notably, radat is usually performed by native Karbala mowkebs and typically ceases after Ashura, as most rituals turn towards religiously focused rather than politically focused. 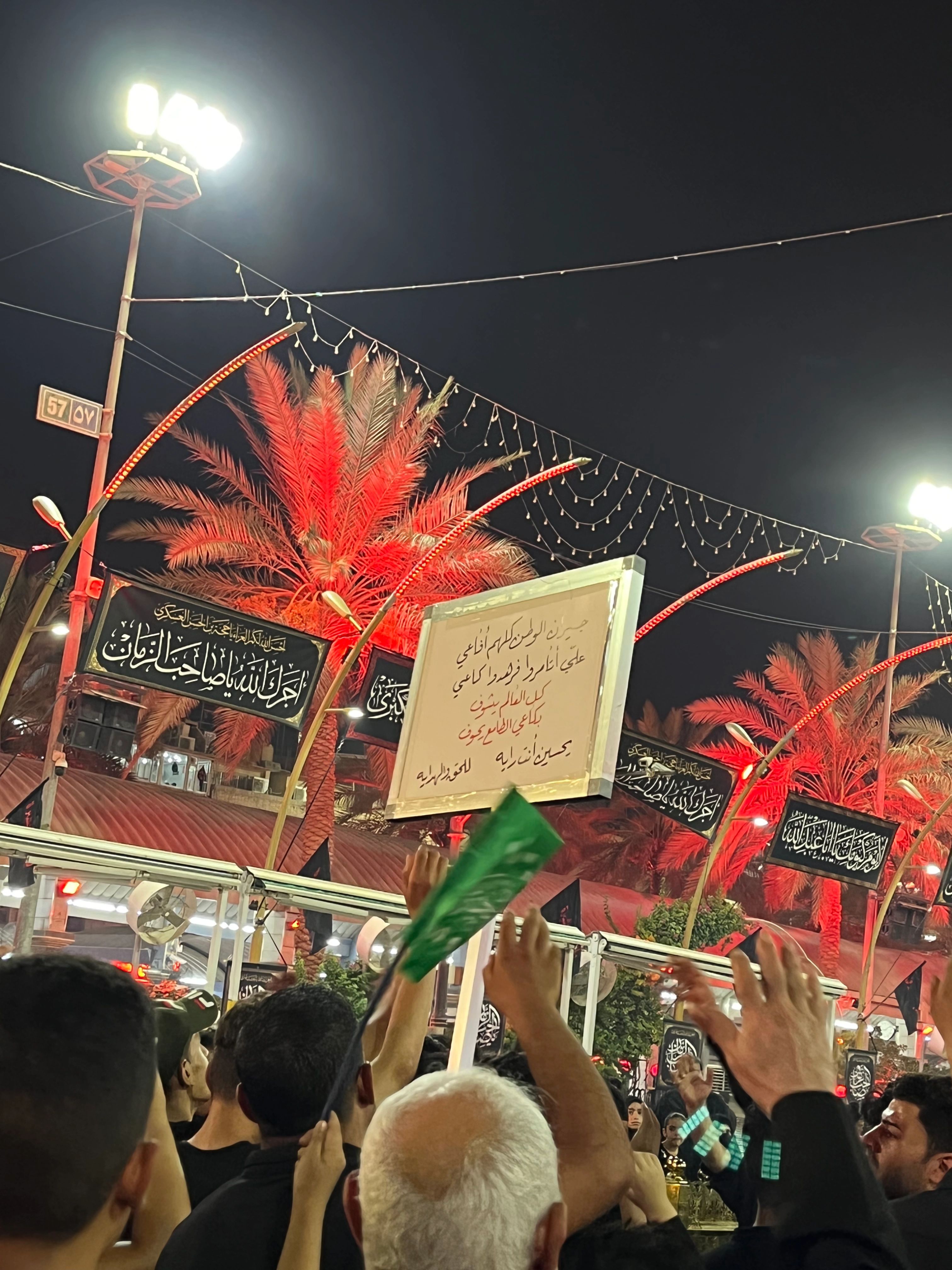 In particular, this one is2

All of the neighbors of the homeland are snakes

Against me, they conspire to steal my land

The thieves which roam my land

Oh Hussein you are the banner The true guide

الوطن can be translated in a variety of ways, although most people I talked to believed it to refer to Iraq-the-nation-state as a whole. If we take this as true, two things follow:

I think reading it from this angle occludes the meaning of the radat. The desire to map the radat onto our preconceived splits is easy, but national cleavages are not local ones. Kalvays warns us of this type of analysis in civil wars by telling us that master narratives are accorded too much significance, and actions in civil wars are not necessarily political, but instead do not always reflect deep ideological polarization. In fact:

It is the convergence between local motives and supralocal that endows civil war with its intimate character and leads to joint violence that straddles the divide between the political and the private, the collective and the individual.3

Similarly, I think there's the impetus to ascribe these narratives to local movements. The framing of the recent Sadrist protests as anti-Iran is ridiculous for similar reasons, Sadrists took to the streets not to protest Iran, but to protest for better conditions. Similarly, Muqtada Sadr himself is not anti-Iran, he is just as close to it as any other Shia leader in Iraq.

Karbala and Karbalaeis themselves have a complicated relationship with Iran. On one side, Karbala receives money from Iran and Iranian pilgrims, which can be seen as a source of Iranian influence. However, another framing could be that Karbala is extractive, using its perch as a shrine city to extract resources from Iran. The relationship is ambiguous, neither transaction nor ideological, meaning that the pro/anti-Iran framing cannot be easily mapped here.

If we reject the master narrative of sectarianism here, how else can we look at this radat? One framing is the narrative of universalism: the usage of watan and "the whole world sees" is a claim that Imam Hussein is for all Iraqis. The master narrative is to see the Shia as yet another partisan on the sectarian scale, with all three groups vying for resources and themselves. However, if we approach it from the logic of universalism, the Shia here do believe that they represent a particular Iraqi future, and a different analysis opens. In the same way, the UN espouses a human-rights-based form of universalism, the Shia of mowkeb Abbasiyya is laying claim to a specific brand of nationalism. This framing provides an escape hatch from wondering why people do not act on purely sectarian lines, and also properly accounts for Karbala's complicated relationship.

Note that these numbers may not be exact, I got them from the department of mowkebs on July 4th, 2022, and the number is constantly changing.